After breakfast with Anola and Peter and terry and Johnny, we headed west on I-10 for the coast and Huntington Beach. we arrived a little before noon to find Galen and his family in a nice relaxed mode. Laura was busy with some extensive Halloween decorations.
We leave in the morning late for a 1:00 flight to Chicago with a connecting flight home that arrives around midnight. we have had a wonderful and active time. were it not for the fact that we both ate too much, we would be feeling perfect.
View the photo album.
Posted by Bill Pickett at 9:52 PM No comments:

Here is the reason we were in Southern California to begin with: to celebrate Gerry and Kara's wedding. We had a wonderful time. It was a special treat to get to meet Peter's brothers and sisters and to spend time with Anola and Peter as well as Terry and Johnny who were here as well.
It was a very lively celebration in a unique setting.
View the photo album.
Here is a video of Gerry speaking his vows to Kara.
Posted by Bill Pickett at 6:21 AM No comments:

After getting settled in Palm Springs at the Ace Resort and Swim Club, we took a couple of hours and went to Palm Canyon for a little hiking. This is unique area, really an oasis in the desert. As you approach, you begin to see palm trees clearly growing in the desert without the support of human installed irrigation. As you get nearer you realize that the natural springs and mountain runoff into the canyons provide the moisture needed for these natural gardens.
The Agua Caliente Band lived here and continue to manage the reservation that includes these sites and multiple hiking trails. We spent time in the main canyon, the aforementioned Palm, as well as another canyon, San Andreas, which has running streams all year round. One can see why these were special sites for the Agua Caliente, providing relief from the summer desert heat and water all year round.
View the photo album.
See a short video panorama.
Posted by Bill Pickett at 6:03 AM No comments:

After breakfast with Melanie and Candy at Mission-North Park, we drove north to spend the day at the San Diego Zoo's Safari Park, formerly known as the Wild Animal Park. We had two choices--actually Marilyn had them--either the Zoo itself in Balboa Park in San Diego or Safari Park in North County which was happily more or less on our way to Palm Springs. She chose the latter and we were both glad she did.

It was a cloudy and drizzly day in San Diego until mid afternoon when the clouds burned off. As a result, the park was not crowded at all and was easy to get around in. We went to the bird show which I remember as the Birds of Prey show. The current version is more diverse and even more interesting than the old show. I took some pictures but also some video which I will process and post when we return home.

Our big treat, however, was a two hour photo safari out into the exhibit areas complete with a guide. We saw many animals up close and personal and learn a great deal about them. The highlight was feeding a female giraffe.
After a full day, we drove over the mountains and into Palm Springs and checked in the ACE Resort and Swim Club. It has a retro 70's look. Very interesting.
See more pictures.
Posted by Bill Pickett at 6:47 AM No comments:

We are in Southern California to celebrate Gerry and Kara's wedding Saturday in Palm Springs. We arrived Thursday on time and in first class thanks to Sean's generous use of his United miles to upgrade us. We stopped at San Juan Capistrano on the way to San Diego where we met Sean who was in town for a business conference. He treated us to dinner at Harbor House in Seaport Village, one of my favorites! We had coffee at the Upstart Crow where Sean worked during and shortly after his time at USD. Tomorrow we have breakfast with Melanie and Candy and then probably the San Diego Zoo before we head to Palm Springs.
Check out the photo album.
Posted by Bill Pickett at 4:01 AM No comments: 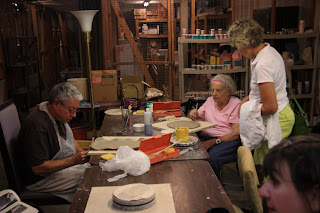 We began the day by visiting Mom's clay class. She was busy working on her projects with several classmates and her teacher. Her finished projects along with those from other class members are on display in a case just outside the dining room. She enjoys the creativity and companionship.We left her to complete her class and then lunch in the dining room at Grand Court. We took off for points north. I dropped Marilyn in theBrookside area where she spent an hour and a half visiting some little shops including the New Dime Store where she made a few purchases. I took off for the Plaza, a grande bold at Starbucks and a couple of chapters in Carl Hiassen's Tourist Season.

When I had finished my reading, I drove back to Brookside and took a few pictures of the lake at Loose Park. With the rain, everything was nicely saturated.
Then we made our move for barbecue at Fiorella's Jack Stack just north of the Union Station. Even though we stayed with the lunch menus, we left stuffed to the gills. Perhaps the double desserts--carrot cake and bread pudding--are what did us in. It is now six hours later and food has absolutely no attraction for either of us. Would that such a condition would last. 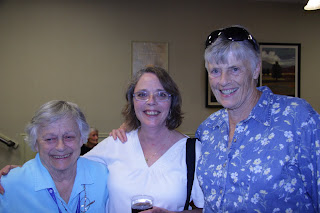 When we got back to Grand
Court, we found Mom waiting in the lobby for happy hour which seemed to have gotten started a bit early. When I asked Steve, one of Mom's friends, if happy hour hadn't started early, he said, as he raised a glass of red wine, "It starts whenever you want it to start." Anola joined us and we had a great time. Joan McGonigle's daughter, Joan, was there. It turns out that Anola had taught her in the seventh grade at St. Peter's school. They had some fond memories of that year.

We went to dinner with Mom although we just sat and visited. Bill Bender and Barbara were the only ones who showed up; Rose, Marianne, Bob, Bill (there are two Bills at the table), and Nadine were not able to be there for a variety of reasons.
Click here to see the Picasa Album with photos from the Kansas City trip.
Posted by Bill Pickett at 4:39 PM No comments:

Monday was a busy day. We went to the Y to work out as guests of Anola. Then Mom and Marilyn went out to lunch and a shopping spree at an "upscale" thrift shop. Anola is probably the local--if not regional--expert on thrift stores and this was her recommendation. They both found some lovely items.
Meanwhile Anola and I went to the Kansas City Indian Center to meet with the person who does genealogy work there. Her name is Nancy Blue. Our purpose in being there was to get some information about our great great grandmother, Naomi Campbell, who was Native American. While we learned a lot, we didn't get any information about Naomi or her husband, Byron, or her son David beyond what we already had. What I did learn, however, explained why that family lived in Kansas rather than Missouri. Missouri had laws that made it illegal for a native to own property, hold a job, maintain a residence, or even stay over night. No wonder the natives lived in Kansas! Anyway I came away determined to be more focused on my own genealogy work as soon as I finish with my orals in October.
Lousia had gall bladder surgery today and is at home recuperating. She had a little difficulty yesterday but seems to be doing OK now. Mary was with her all day yesterday and overnight as well.
Posted by Bill Pickett at 4:23 AM No comments: